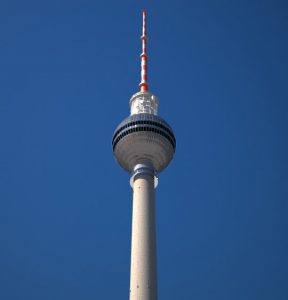 High realistic 3d model of the TV Tower in Berlin with Vray Materials.

The geometry of this Model used Polygonal Ngons .

The television tower is close to Alexanderplatz in Berlin-Mitte district.
It was constructed by the government of GDR ( German Democratic Republic ) between 1965 – 1969. There are two visitor elevators carry 12 people each in about 40 seconds to the observation platform at 203 meters.

The visitor platform ( panoramic floor ) is of about 203 metres above the ground.

Wish you a good day.